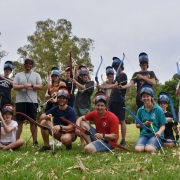 There was plenty of joy on the ground with Young Life’s activities returning during the summer school holidays.

After a shaky couple of seasons with cancellations due to the COVID-19 restrictions, summer activities were back with events in Queensland, NSW/ACT and South Australia.

A one-day archery tag activity held in the Barossa in South Australia brought volunteers and kids together for fun and friendship.

“At one stage we were looking for a lost necklace,” volunteer Charles  said. “We took the opportunity to open a discussion with the question: Who are you closest to? A couple of guys, unknown to each other, went off-topic and began talking about how they had no friends. As they were speaking, you could see a friendship was forming.”

At Young Life Redlands in Queensland, three separate days of events comprised bowling, Frisgolf, and a water day. Volunteer Jonno said the fellowship on each day was brilliant.

“One girl rocked up every day,” he said. “We’d met her before at breakfast events. I think she felt she was known and cared for – something she might not get from school.”

“I love being a representative and ambassador for Christ,” he said.

“I love the heart of Young Life. It’s adults leaving their own world and entering the world of young people – a confusing and complex world.”
Jonno , Young Life  Redland volunteer

Young Life Parramatta Area Manager Ben Hura says two people made on-site commitments to Jesus at the recent NSW/ACT five-day camp at Wiseman’s Ferry. “And since the camp two others have been to church for the first time,” he says. “God doesn’t work in percentages but overall it was an awesome success.”

Numbers of campers were down because of COVID but attendees still had a go at water sports, archery tag, bushwalking, and enjoyed a pool party!

In 2021, the Parramatta/Ryde Area was forced to cancel its Summer Camp because of the pandemic. “It felt good to get the Young Life family of volunteers together,” Ben says. “A number gave their testimonies.”

He says the two who gave their lives to Christ were scheduled to attend last year’s camp but missed out due to the cancellation. “It’s pretty cool they came back this year and even better that they became Christians,” Ben says.

Young Life will be holding camps throughout 2022, check the Events page to see what’s coming up.